Taken literally, homeschooling refers to a parent educating a child at home. What Karla Withrow, Alycia Wright, and parents across the country have discovered in practice, however, is that homeschooling involves learning anywhere, all the time.

After all, they’re in good company. According to a recent Associated Press article, the surge in families choosing to homeschool during the pandemic has largely sustained even as schools have reopened. “In 18 states that shared data through the current school year, the number of homeschooling students increased by 63% in the 2020-2021 school year, then fell by only 17% in the 2021-2022 school year,” the AP reported.

Withrow, a mother of two who lives in southern California, made the pivot during the pandemic, when her older son, Nixon, was getting ready to start kindergarten.

“I never envisioned being a homeschool mom,” Withrow said. “I was really uncomfortable entering Nixon into the public school system on Zoom. And then it started to get to me that it was just here at the house.”

Drawing on her background as an educator, Withrow chose to launch EarthChild Explorers, an exclusively outdoor microschool that utilizes nature to teach literacy, math, science, social studies, and the arts to students in preschool, kindergarten, and first grade. Based on community feedback, the program will be expanding nextschool year to reach older students in the homeschool community.

EarthChild Explorers is modeled after forest schools, which apply outdoor learning methods in a forest or woodland and are designed to support play, exploration, and risk-taking.

“When we leave the nature spaces, we leave them as they were when we entered,” said Withrow, who previously worked as an early childhood education teacher and child development coach. “This teaches care and respect for our environment and communities in which we live.”

Across the country in Richmond, Virginia, Wright is a fellow former educator who’s been homeschooling her four children for eight years. She started the Cultural Roots Homeschool Co-op as an educational option that centers its “programming around the diverse cultural attributes, traditions, and histories of Black, Brown, & Indigenous communities.”

“I was listening to someone one time talk about their childhood, and they used the word delicious, he said his childhood was delicious, and I remember thinking that just sounds wonderful,” Wright said. “How beautiful would it be if I could create something kind of similar where my kids would look back and say, ‘Oh yeah, we did spend a lot of time in libraries. Oh yeah, we did go to theaters.’”

Twice a week at a rented location, hired teachers lead a range of courses, including Capoeira,  Science, Mapmaking/Nature Studies, Weaving, Book Club, and Theater. The learners are at home and in their community the three other days of the week.

The hybrid arrangement allows Wright to spend more time with her children, in ways that they get to choose together.

“I think I’m much more in tune with each of my children,” Wright said. “I love that we get to spend so much time together.” 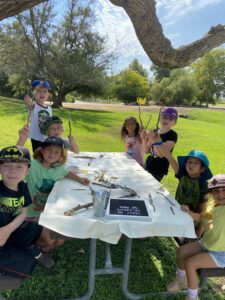